Camping?  Well, yes, sort of.  Recently, I inherited a ‘camping trip’ for 4 teenagers…  Fortunately, I was able to diminish the ‘tents and open fires’ element by reserving dormitory beds in the Pholela Hiking Hut instead.  I borrowed a two plate gas hob to do the cooking from my brother and packed all my favourite pots. The very nice outdoor boma provided a civilised alternative when open fire was required. Padkos snacks were raw organic carrots – which went down well, so I was feeling confident. 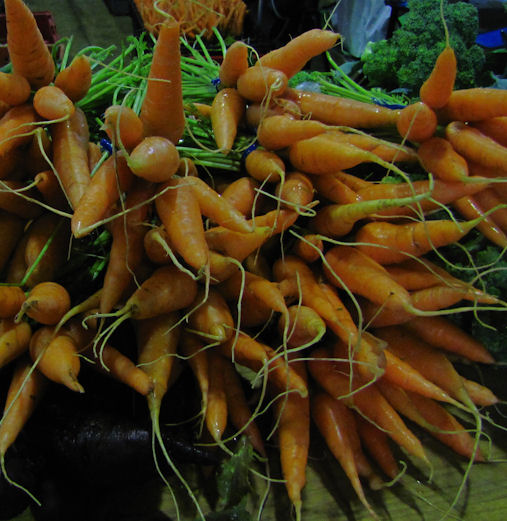 I’d decided, as I was now in charge, it would be vegetarian food although I knew the Zulu boys might not be thrilled.  Wendy, however professes to be vegetarian so I hoped to inspire her at least.  I stocked up on fabulous local organic ingredients and then made a terrifying trip to the supermarket (something I absolutely NEVER do) for the ‘basics’.  I was overwhelmed by the colours, noise, packaging and bizarre amount of choice.  So off we went, stopping at Pucketty Farm Stall in Underberg for their famous homemade bread and chocolate brownies. 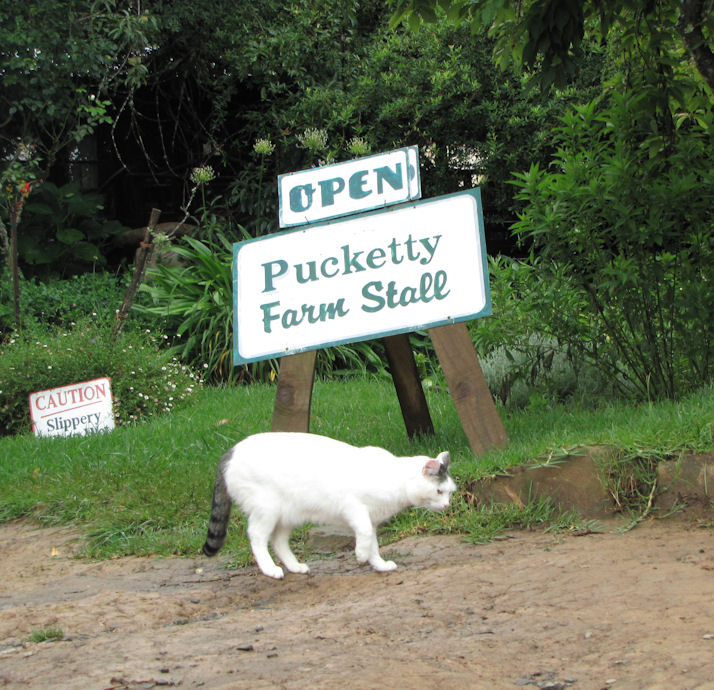 We arrived in the cold and rain, so I was ever so grateful for not attempting to actually camp.  The kids built a big fire and played cards with tea and brownies to sustain them.  All I had to do was heat up the chickpea stew I’d made the day before and whip up some polenta to go with it. 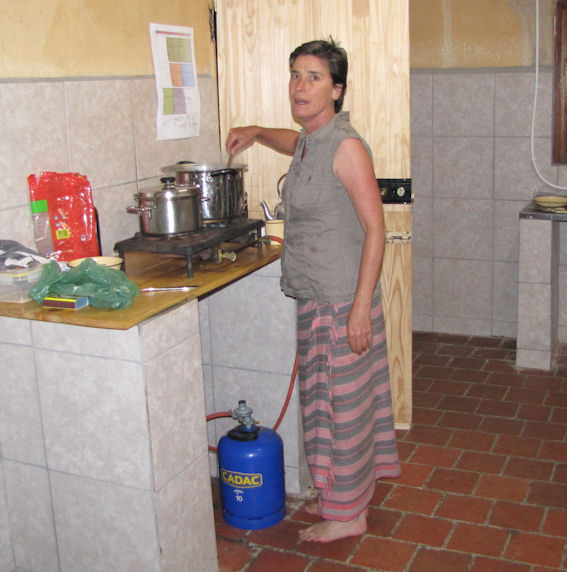 Oh dear, chickpeas were far too weird for this company!  As this stew is my standby mainstay for big parties, and usually gets good reviews, I had thought I’d be safe.  They did politely eat some but there was TONS left over!  Fortunately, Wenceslas Duma who works at Cobham, accepted the rest with delight and pronounced them delicious!  “Eish, chipkins” become a constant refrain – especially when I served up a small bowl for lunch the next day too. Wendy gamely tried, but fervently hopes she will never come across one ever again! 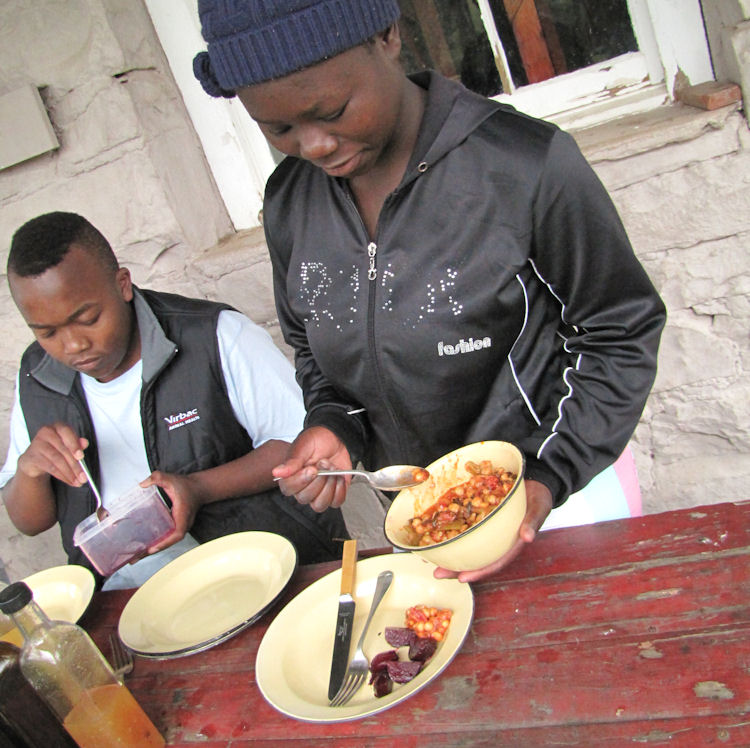 Breakfast were based around free range eggs. Everyone was chatting about happy eggs in no time. Yay! progress! 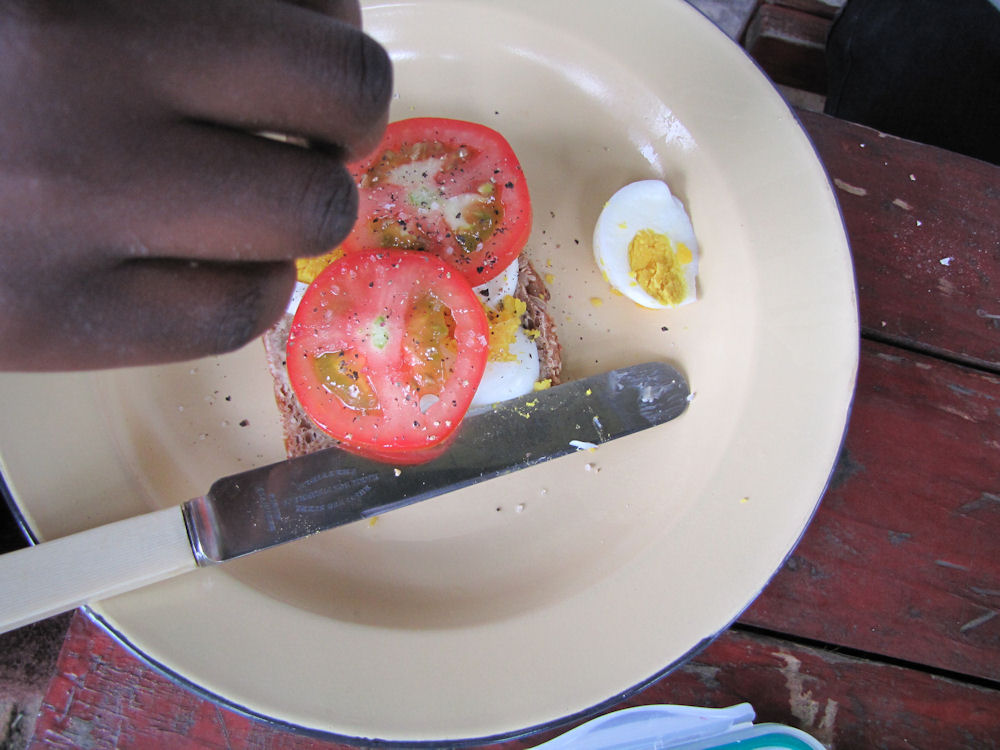 Everyone loved the Fry’s soya based ‘meat products’ – ok, I’ll admit,  I chickened out of being hardcore.  I knew they would like these – the ‘Louisiana Tenders’  were a hit (little drum stick shaped KFC wannabees) and the sausages were a familiar brown.  Even though everyone was slightly suspicious at first (check out those faces!). 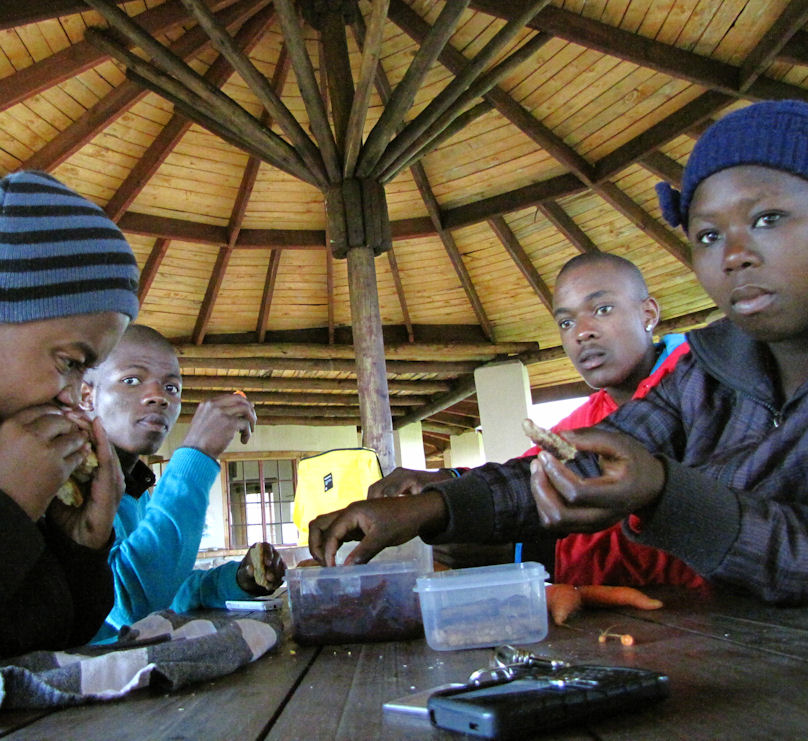 There were protestations of “I don’t like beetroot”,  however organic steamed beetroot with olive oil, garlic  and balsamic was suddenly a favourite.  See Vusi eyeing the last scraps! 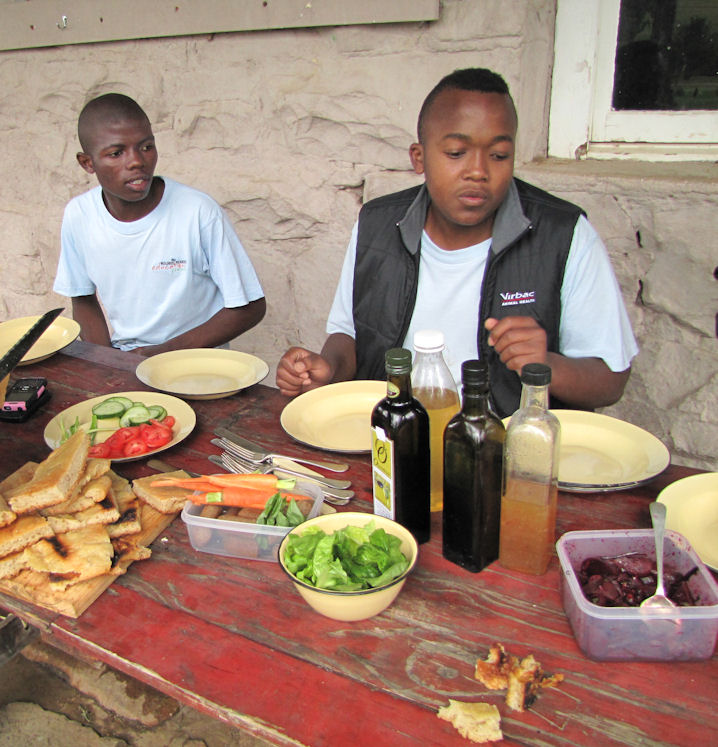 I was absolutely fascinated by the combinations of sandwiches the kids made for breakfast and lunch – almost trying to outdo one another with weird and wonderful combinations.   Tomato, banana and peanut butter anyone? 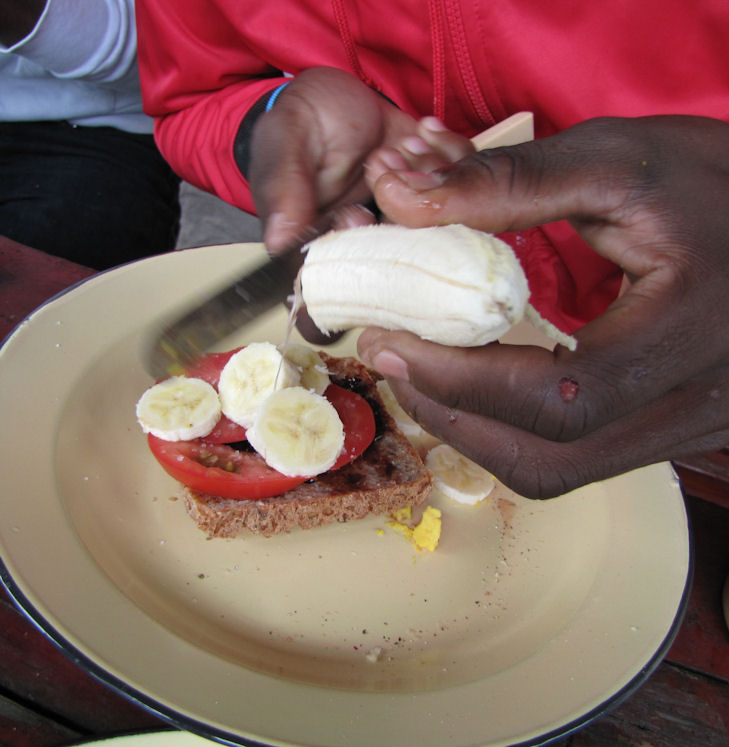 The next night we served up lentil and potato curry with green beans, accompanied by basmati rice.  This was far more successful. Although Wendy picked out all the lentils and only ate the potatoes. She’s going to have a hard time being vegetarian eating only potatoes!

So I was feeling a bit vulnerable, I have to say. Although I knew the food was good, delicious and nutritious, I did want everyone to be happy.  At the same time, the excursion was NOT about food – it was meant to be a wilderness experience to inspire more positive environmental action.   Lots of Wedgwood nougat helped – we can buy ‘seconds’ at a bargain price at the Karkloof Farmers Market – I was very pleased that I had.

A huge fresh watermelon which we carted down to the river to eat in the water and on the hot rocks was a great success! Win some lose some.

Nkulu was absolutely NOT going to do the dishes, despite the roster they created. He was however happy to make the fire. 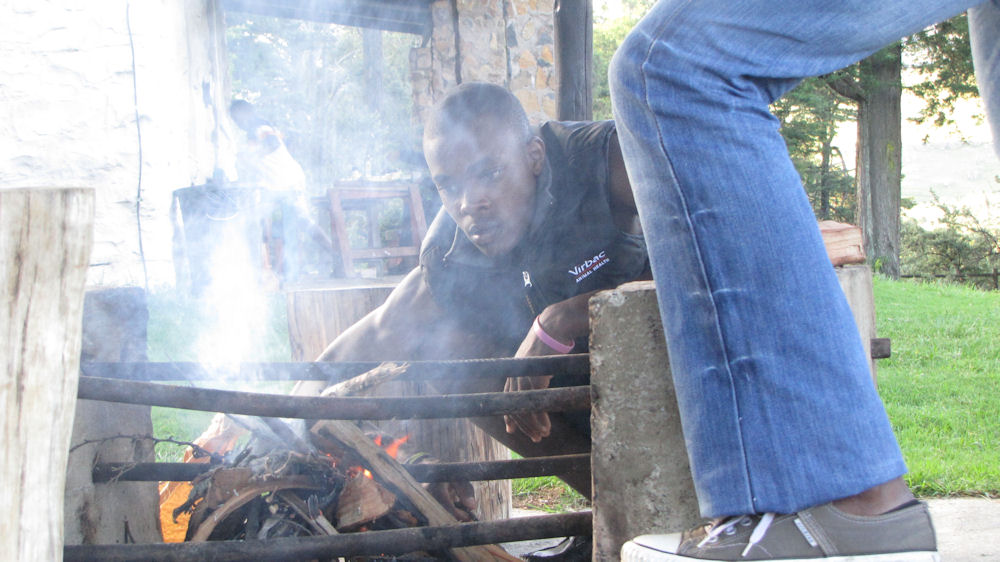 We had imagined everyone would enthusiasticlly skewer organic veg onto the sticks. Ooooh no. Well, Christeen and I had fun with the colours. When they were cooked however, everyone enjoyed them despite their apprehension (masses of Morrocan spices may have helped).  The homemade Lemon Cordial and Mint Syrup were popular, to my surprise. 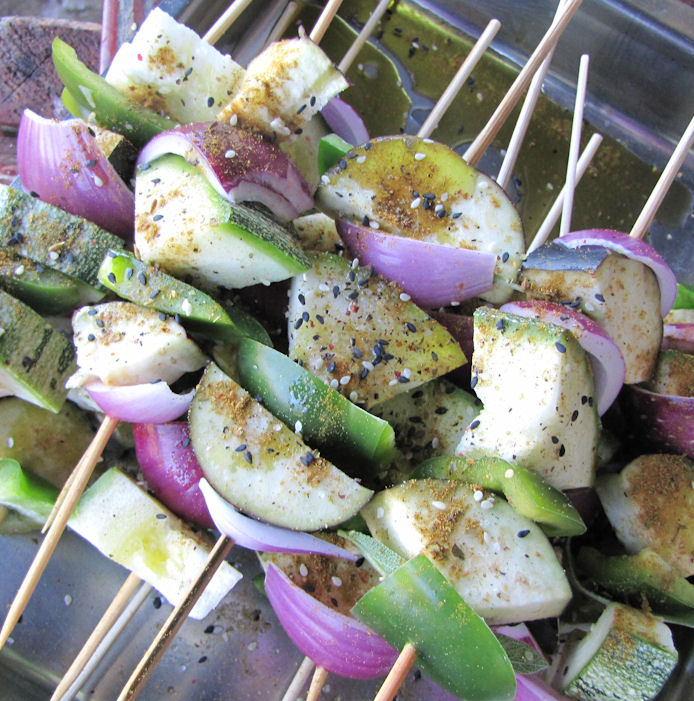 The pasta with tomato sugo (heaps of fresh herbs hidden in the sauce) which followed the kebabs, was the best received dish of the trip.  I even used the leftovers to make pasta salad crammed with sundried tomatoes, almonds and herbs for lunch the next day and it still went down well.

Despite not doing the best job at promoting vegetarianism, I did have the most marvellous weekend imaginable.   Especially, Wendy’s comment “We must be happy for the food we eat because it is given to us with an opened heart.”   Enjoy all the gorgeous photos we took and read all about it at: 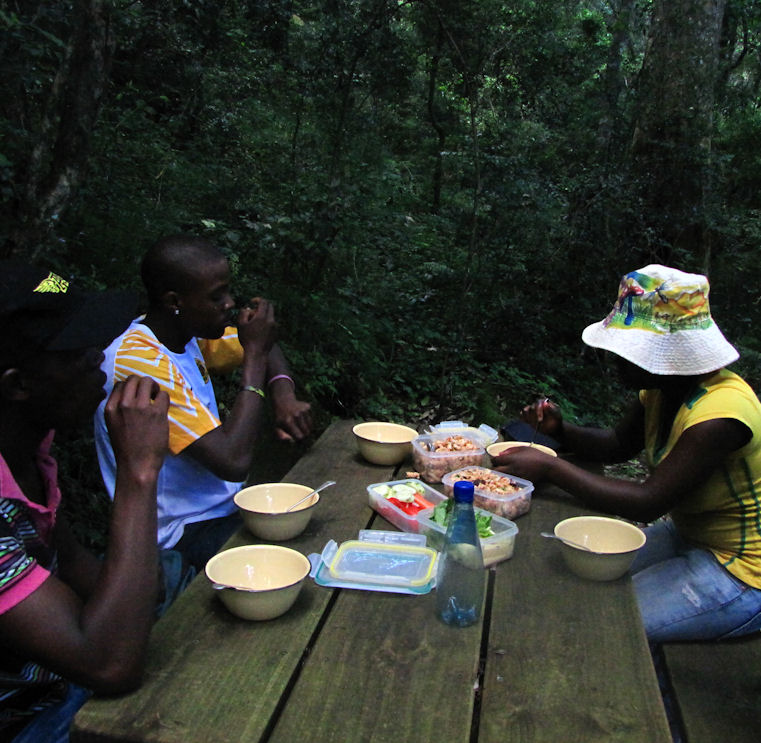