Recently, I had to spend some time in Johannesburg.  This is not a pleasant idea, especially when sandwiched between visits to Van der Bijl Park and Ladysmith…  Of course, I was wondering what on earth I would find to eat.

Van der Bijl Park is on the Vaal River – a mighty African river subdued by greedy homeowners who have built ghastly mansions all along the banks so that no one else has access to the river. Eish, this makes me furious!  Anyway, I was determined to find the river and sit beside her, so  headed for Stonehaven-on-Vaal.  When asked in the dining room where I’d like to sit, I startled the waiter with an emphatic “beside the river” and headed to the banks, in the rain, with my crochet for company.  A willow tree kept me more or less dry as I ate one of only two things on the very long menu that did not contain dead animals.  It was lovely actually.  I felt desperately sad for the river though. 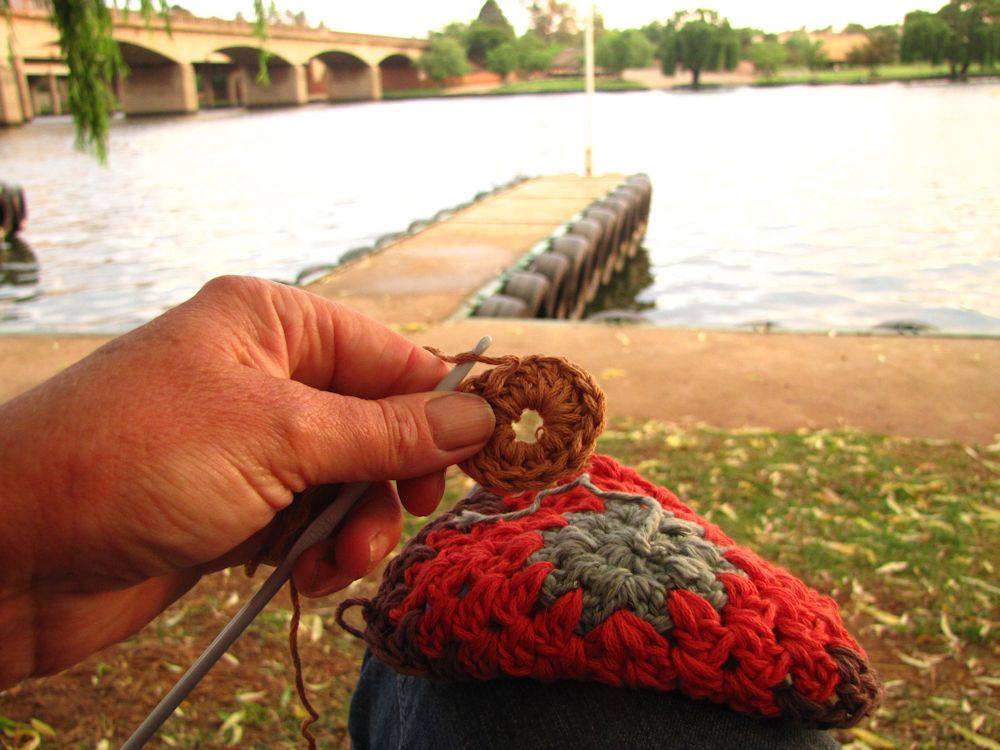 The man I had to interview was, surprisingly, virtually vegetarian. He loved gardening and grew most of his family’s food. He had just planted a gazillion pumpkins – most of which he would give away to those less fortunate than he was. My faith in humanity was restored (a little).

Then I hit the Golden Highway and headed for the Big Smoke.  As most of my appointments were on the West Rand side of the city, I booked into Yellowwood Cottage at the absolutely charming Random Harvest Indigenous Nursery in Muldersdrift.  Aaaah, it felt just like home (with a bit more traffic and sparkling lights).  Utterly delightful, I would stay sane.

I was welcomed with a couple of just picked peaches from the garden, fresh milk and cream and charming smiles. Ok, so Jozi is not so scary.

The cows were milked just a few metres away.

On the way, I’d done a bit of detour out towards the Cradle of Humankind and come across a farm stall.  It looked promising so I stopped.

I found that they grew onions and tomatoes and cucumbers and all sorts of things. I didn’t ask if anything was organic, fresh was good enough. I bought as much as I could carry, including lots of jars of tomatoes and fig jam.

So supper in Yellowwood Cottage would be easy. I’d packed some of Bella Jo’s pasta as a back up.  I did need greens though….   A wander around the gardens revealed plenty of imifino.  I harvested a pile of Purslane growing on the edges of the path outside the veggie gardens,

cooked them up with new onions and fresh tomatoes 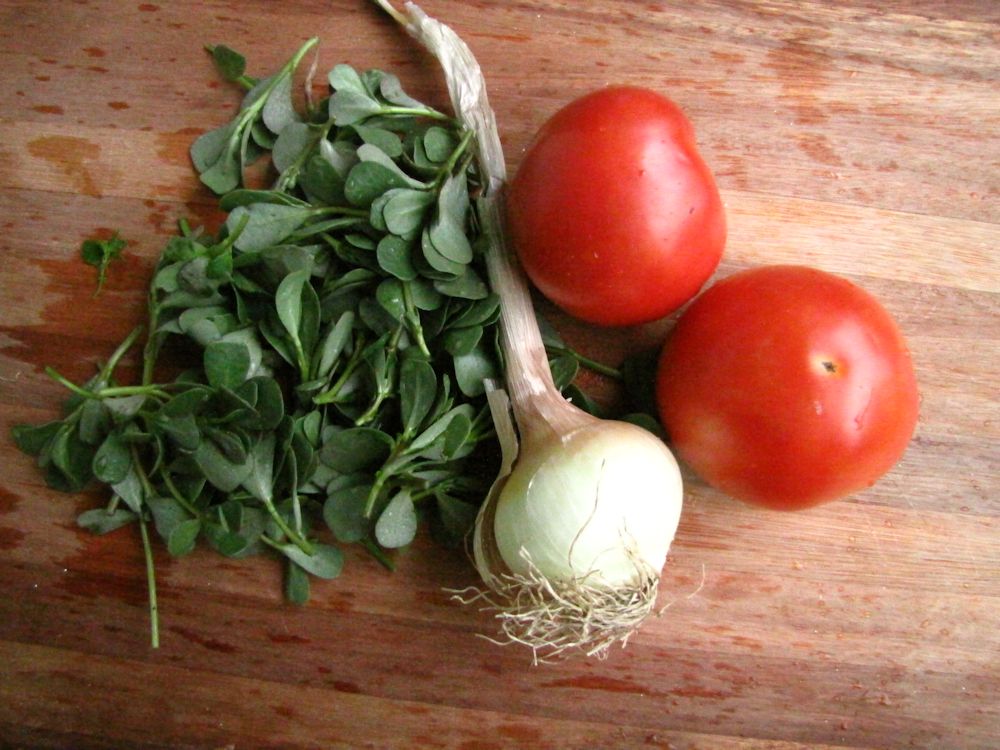 and ate on my little patio with birds singing in the indigenous garden around me.  I slept with my doors wide open to the wonderful Highveld storm that followed.

Breakfast was Israeli inspired – cucumber, tomato and free range eggs – which I had bought the day before.

I’d already decided that I simply had to spend time at Leafy Greens Café (at the famous Casalinga). I have been reading about this organic vegan restaurant for years.  I finished my interviews as soon as I could and wandered along the pathway way to the café. 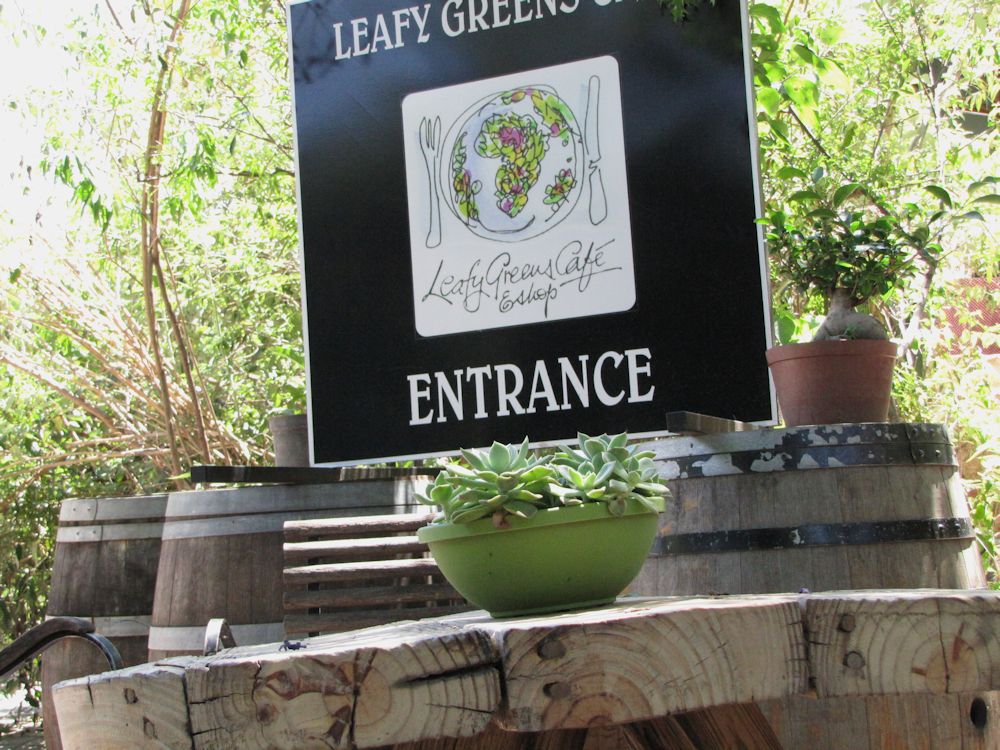 There were big bunches of onions drying on the rafters – obviously it was onion season in Gauteng.

It was charming.  Seemed a bit like home but with oodles of urban cred.

The menu made things difficult – ribbons of courgette, were very tempting.  I decided on artichokes (grown right outside) with vegan cheese.  They were fabulous, although the picture doesn’t look so good.

As it was hot, I had to try a local craft beer – Copperlake. I had never heard of it before, but it was made just up the road in Lanseria.  It was a bit too sweet for my taste, but the bottle was gorgeous. 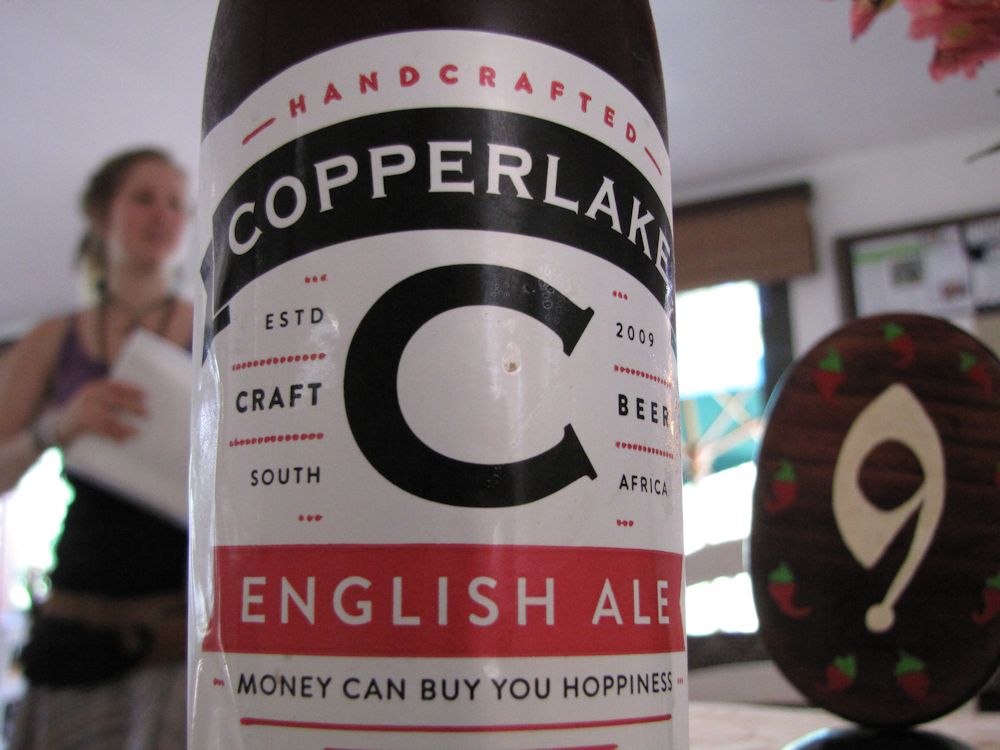 I needed greens, so ordered a kale salad as well.  It was enormous and I couldn’t finish it, so took the left overs home for supper.

On my way back to the verdant Midlands, I stayed over in Ladysmith.  A town filled with fast food joints.  There is only one restaurant, called The Guinea Fowl, in the Pick ‘n Pay parking lot.  All I could eat was a very big green salad.  Oh well, I topped up the calories with cold beer.  The next day, my host took me to the Wimpy for lunch – when last were you in a Wimpy?  I just ate chips, it seemed appropriate.  I did love all the aloes planted around the town.

I was happy to be home. At least I didn’t starve.