Paul Duncan has been big inspiration in my life.  From him, I learnt to make compost and weed tea – and a whole lot besides.  I remember bumping into him in a shopping centre once. We got so engrossed in our conversation about feeding the planet/saving the planet, we were completely oblivious to the rampant consumers around us.  We may even have caused a jam as trolleys had to swerve around us.  I am surprised that I haven’t written about him before, but I guess he is such a constant in our Midlands lives that I focussed on the newbies.  He used to have wonderful dreadlocks. 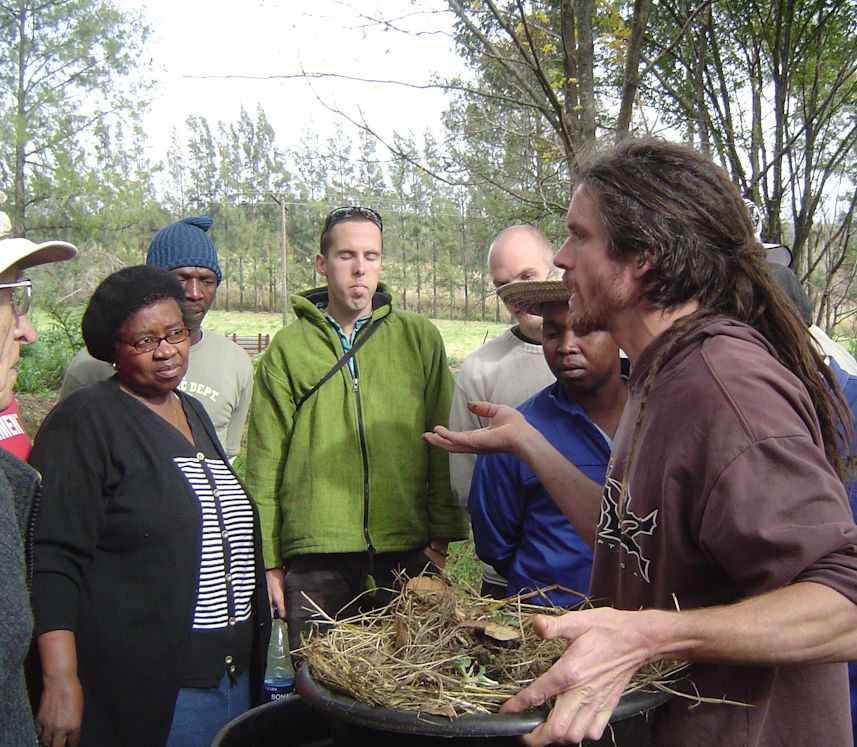 Since 2000 he has worked really hard to ensure that the Howick community, at least, has access to healthy food.  Mary Mlambo has been his friend since shildhood and they have  worked together  for years.  They both believe fervently that everyone has the right to good wholesome food, produced without harm and that if everyone ate fresh, local food the planet would be a much better place. “Hey man, it’s easy to grow your own veggies” Paul quips. “Kulula ukwenzi khomposi” adds Mary, cheerfully. 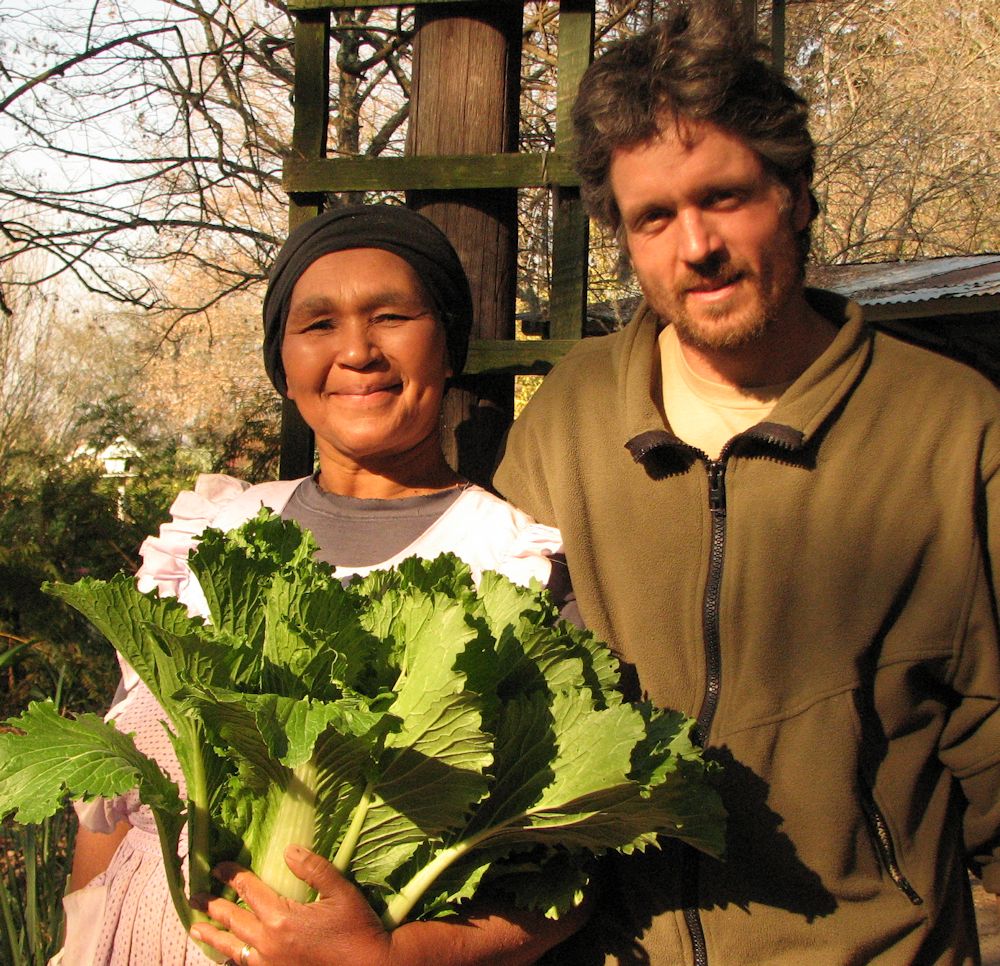 Paul grew up in Karkloof and spent his childhood exploring the hills, streams and forests, developing a deep respect for natural systems. So it was no surprise that, when he took over Dovehouse farm from his dad, Arthur, he chose to follow the permaculture route, which works with nature, rather than against it. “My wife, Shereen, and I dreamt of developing a small scale organic farm that would provide a healthy lifestyle for our family as well as those around us.”

Over the years, Dovehouse has become a centre of inspiration. It is not always easy to get people to change their lifestyles to more planet friendly ones, but Paul believes that education is important and he generously shares his extensive knowledge through regular workshops and consultations. Many will have heard of ‘mulch, worm tea and effective micro-organisms’ for the very first time at Dovehouse and there can be little doubt that Paul has influenced hundreds of people to start growing their own food, or at the very least, choose organic produce.

His hands-on composting workshops are terrific fun and have ensured that far less green waste goes into landfills as people are now building their own heaps and in the process replenishing our precious soils. “This is my greatest joy, I love nothing more than scooping up rich, dark earth in my hands. It smells so good and I know will produce great veggies too.” he says passionately. “I recently read statistics that show that half of the Earth’s top soil has been lost through the effects of humans. Of the 50% left, 40% is now classed as degraded soil. It is really important to support farmers who focus on building healthy soils and environments”.

Paul and Shereen realise that convenience often outweighs environmental and health concerns for consumers, so they have opened a new shop in Howick that ensures good food is easily accessible to everyone. I am thrilled. They are even open on Saturday mornings – although I do still like to go to the Karkloof Farmer’s Market to buy produce from Paul’s lovely mum Zoe, if I am awake early enough. The range of in season, locally grown organic produce available is mouth-watering. At the moment the winter crops of cauliflower, broccoli, kale, beetroot and carrots are at their best.

If you are luckily enough to live in the Midlands, there is no reason not to ensure that Paul’s dream of a healthy, flourishing, sustainable community becomes a reality.  Find Dovehouse at 78 Main Street, next to the Pin Cushion, just up from Grapevine. 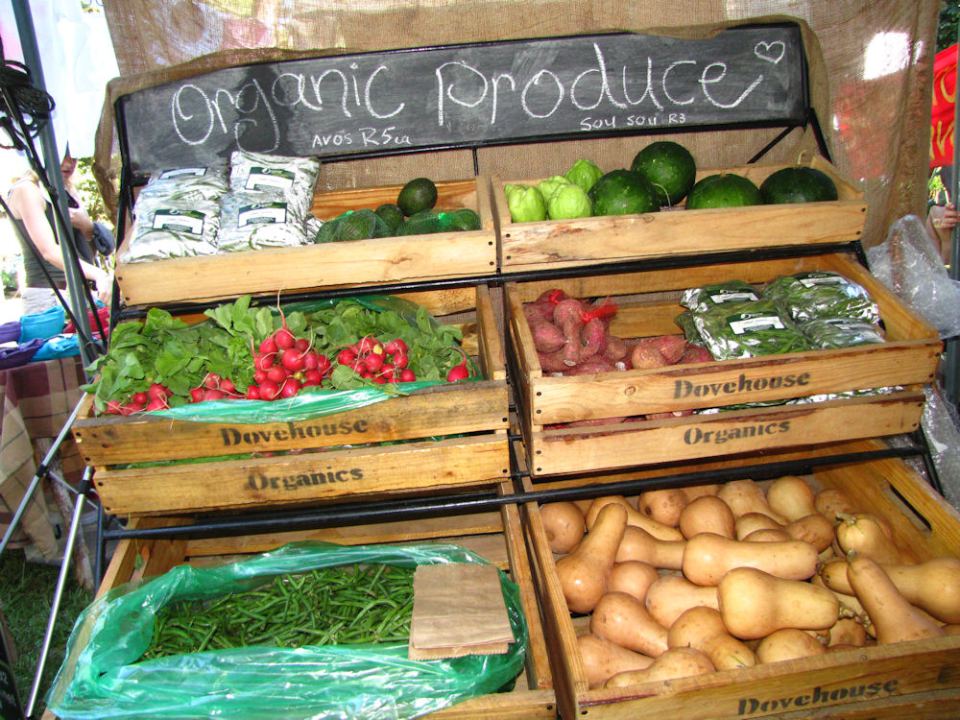 Paul doesn’t have dreadlocks anymore, and his hair is going grey just like mine.   He is still regarded as the go-to-guy for food gardening around here, continues to inspire everyone he meets and is happiest surrounded by spinach.