Doing the Social Media swirl at the moment is a picture of a cute pig in a Christmas hat, sitting at the dinner table with the caption “How to have a pig for Christmas dinner.” Did you also see the delightful Turkey Dinner video –  instead of eating turkeys for Thanksgiving dinner, families visited a turkey rescue centre and fed them platters of their favourite things?

Unfortunately for Woollies, all this online compassion has coincided with the revelation that the pieces of pig you can buy on their shelves are not as ‘kind to sows’ as we hoped to believe.  While there is some effort to free the pregnant sows from the crates in which they cannot move for their entire lives, we now discover (ANIMAL VOICE December 2015) that, at the Pork Packers Abattoir, the method of killing the pigs leaves a lot to be desired.  “The process involves caged pigs being mechanically dropped into a pit (also known as a Gondola System) which is pre-filled with carbon dioxide (CO2). After minutes of exposure to the CO2, the pigs suffocate as a result of the lack of oxygen. But until they lose consciousness the pigs experience panic-like symptoms…”   The NSPCA proposed changing the gas in the pit from a noxious gas, such as CO2, to an inert gas like argon or a combination of argon and CO2 which would render the animals unconscious without the stress and panic of suffocation. According to its Media Statement, this proposal was submitted to Tiger Brands and Pork Packers and was rejected (presumably on cost grounds).

Crikey, this sounds horrific, surely even to those who  merrily consume animals.

The great disappointment comes because many people trust Woolworths and this seeming inability to live up to their own claims regarding animal welfare and commitment to its ‘Good Business Journey’, is dreadful. If you have the stomach to watch your food die –  view the video of the pig gassing process here:  https://www.youtube.com/watch?v=OBXvvX2ZBng&feature=player_embedded

A friend wrote to Woollies about the issue, saying that as a long standing customer she was “very angry as I have believed that Woolworths is one of the few if perhaps the only company has had any commitment and transparency regarding their food brands.”   She received this non-committal reply from Carl Herman custserv@woolworths.co.za

“Woolworths cares deeply about the welfare of animals. We believe it is our ethical obligation to ensure that our suppliers treat the animals in our supply chain with respect and in the most humane way possible, and are committed to continuous improvement in all aspects of animal welfare.  All suppliers are required to promote animal welfare by minimising any potential harm, stress or pain to animals, and adhering to relevant national and/or international standards for animal welfare.” Despite these comments from Woolworths it is interesting to note that animal welfare is not listed in the terms of reference of its Social & Ethics Committee.  This, of course, then raises the question as to whether Woolworths is genuinely concerned with animal welfare, or whether this is just a marketing ‘hook’? 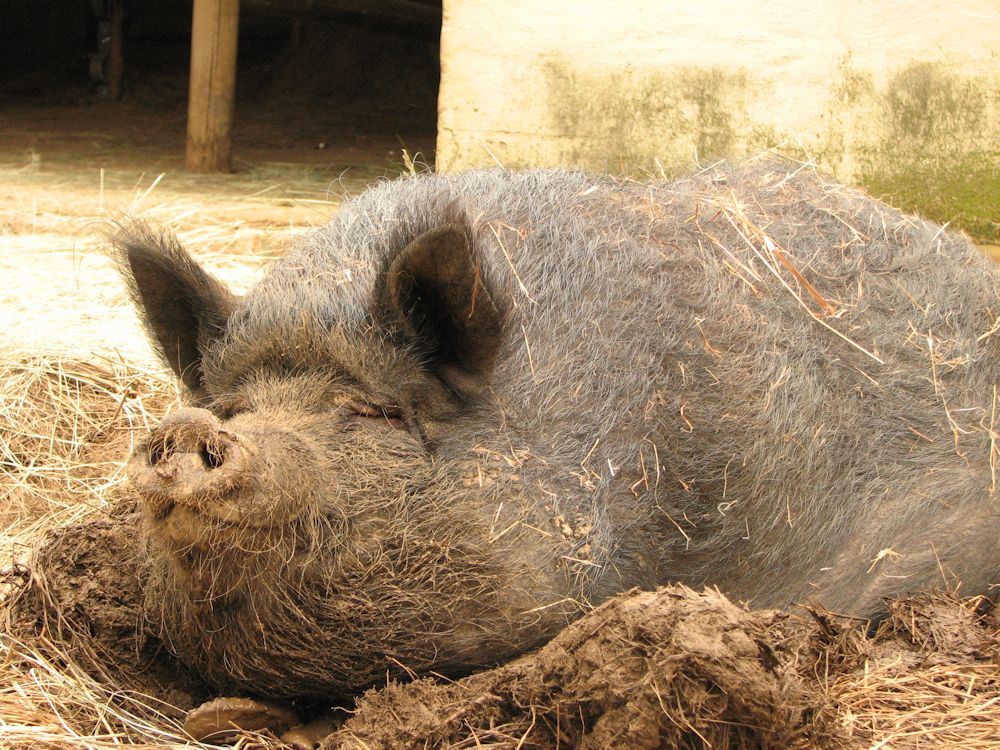 My animal activist pal, Bridget Ringdahl, shared this distressing news widely as did I. We are heartened to hear that at least two of our friends have reconsidered their Christmas menu after reading about this.  While for Bridget and I the choice is really easy – we have an abundance of in season, local veg for our celebrations, for others just starting on the ethical eating journey is must seem a bit overwhelming.  It made me think about where I began…

I recall a Christmas in the late 80’s, which probably marked the start of my journey. We (Paul and I) thought a goose would be just the thing for a celebration lunch, but couldn’t find any in the shops.  An activist friend (this was the struggle era) suggested we could get one from the townships – but it would be ‘on the hoof’.  A big bird was delivered that ticked all our boxes at the time. We named him/her Mandla (probably our first mistake). After a few days in our backyard playing in the sprinkler, it was clear that the thought of killing and eating the creature was a bit far fetched.  We released him/her onto a dam nearby.

At that time we still ate animals regularly and didn’t mind others doing the  killing on our behalf. In retrospect, this must have been the start of our conscious eating journey.  First we gave up eating pigs after learning how intelligent they are (cleverer than dogs).  Other creatures followed in an order that was random really, but meaningful to us, until after many years, were emerged vegetarian (vegans in conversion). Now it seems to us very odd that people eat other creatures.  That animals have to suffer for human greed/pleasure is utterly unbelievable.

So how uncool is meat production really?  Besides the fact that animal agriculture is responsible for more greenhouse gas production than all of transport combined (stats vary between 18 and 30 %) and climate change is without doubt the biggest scariest issue we face, it is the cruelty and mindlessness that is the real issue.

Once you know something, you can’t un-know it. Like the working conditions of those making cheap clothes in Bangladesh, or toiling in non-Fair Trade coffee plantations. So, I am fascinated by how it is possible, that even though everyone knows that pigs are as intelligent as a three year old child, feel pain and suffering, and are protective of their offspring, inflicting traumatised lives on them so that you can sprinkle bits of pig laden with salt on your salad is acceptable? (ooh, yummy carcinogens).

Aaaaah, advertising!  Check out the labels! The “fresh country air and spring water” is what the humans are getting, not the pigs crammed in sheds on their ‘farms’.  I recently watched a video about a well known pork producer in the KZN Midlands. In the entire thing about her life and how she cooked delectable bacon sarmies for Sunday breakfast, one never ever saw an actual pig!  Why? Because the next pig to become a sandwich was crammed into a shed with 1000s of others and presumably routinely fed anti-biotics because of this overcrowding. 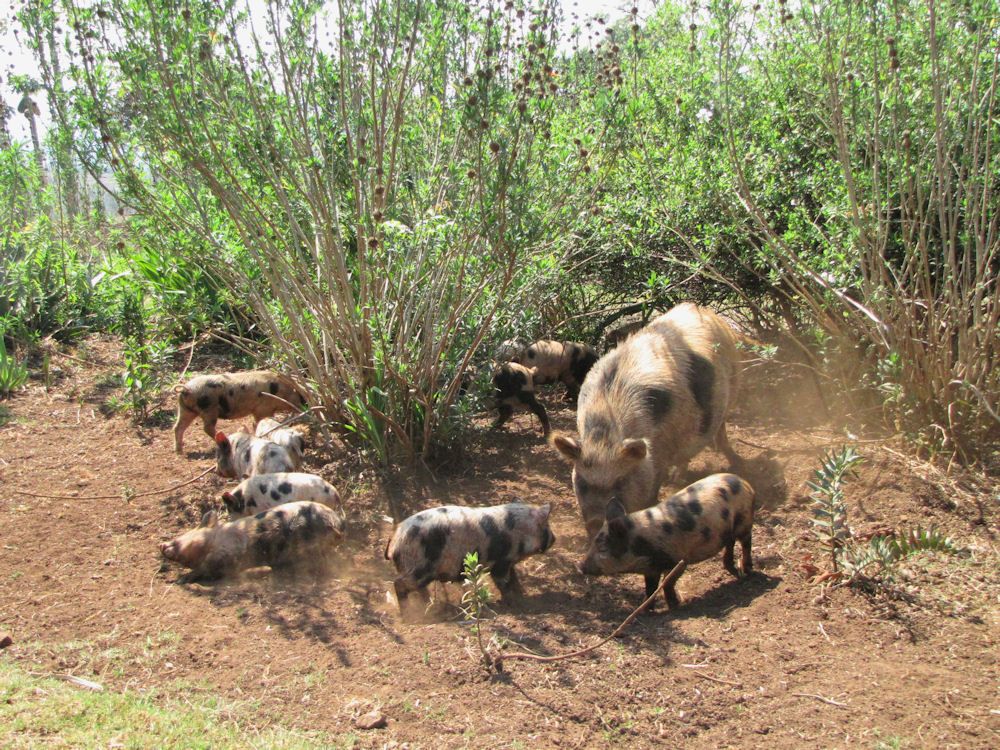 How did animals simply become a unit of production? I hear trucks full of squealing pigs at the trading store on their way to  the abattoir.  I live surrounded by industrial chicken operations, where ‘spent hens’ are sold cheaply once they don’t lay an egg a day.

So I am constanly reminded of the awfulness. I guess in a supermarket it is easier to ignore. There are ethical producers in our midst – Enaleni, Dargle Ducks, Croft Farm. If you really have to eat animals, surely it is worth eating healthy ones?  The more people who do, the more kind farmers will flourish.

Peter Singer, Practical Ethics:  …at the level of practical moral principles, it would be better to reject altogether the killing animals for food, unless one must do so to survive. Killing animals for food makes us think of them as objects that we can use as we please. Their lives then count for little when weighed against our mere wants.