One shouldn’t really describe non-edible things as “delicious” or “yummy”. I do feel though, that some experiences and colours really are succulent and tasty even though they aren’t eaten.   The ‘feast’ along the wildcoast was one such experience, and besides, this is supposedly a food blog, so I need some tenuous links at least…

Blue is not my favourite colour. Definitely not.  However, blue was the dominant colour of a very interesting and enjoyable week in the wild and I may just have to give blue a chance. It began with my desperate plea to the shop assistant at Cape Union Mart to find me a raincoat in anything other than blue. To no avail – blue it was.

So I packed up and headed off. At least my back pack was orange and I covered my notebook in orange fabric. Some of the dogs were orangeish too.

Our world was overwhelmingly Blue and Orange for the first few days.  Perfect complimentary colours, no wonder it all looked so spectacular. 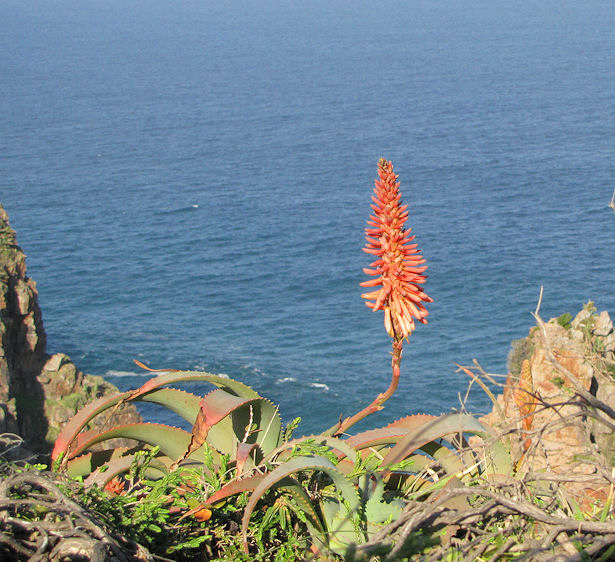 The aloes were orange

the sea was blue, the sky was blue, it was very blue. The rocks were generally white, but

sometimes rocks were orange coloured against the water. 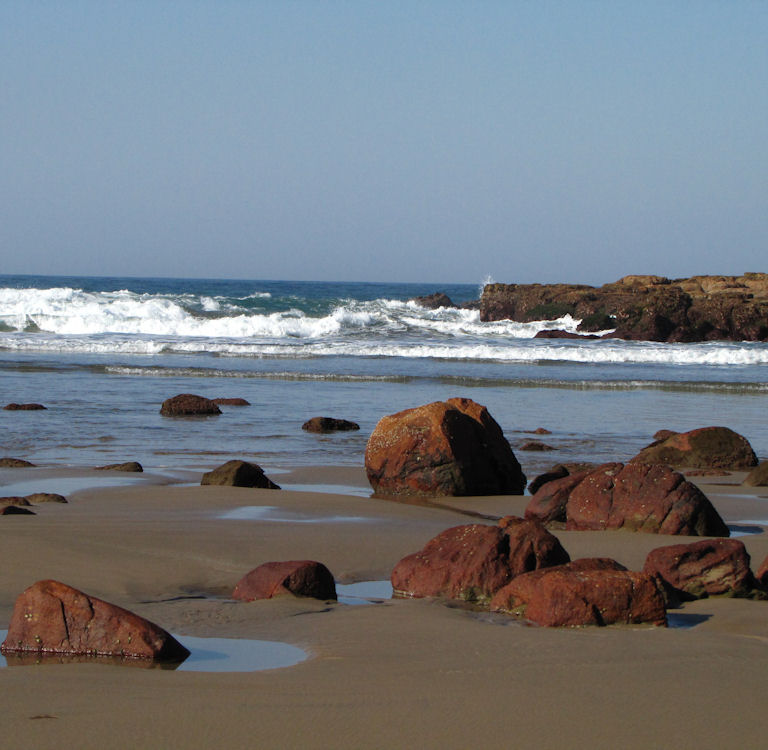 The massage parlour was blue (of course) 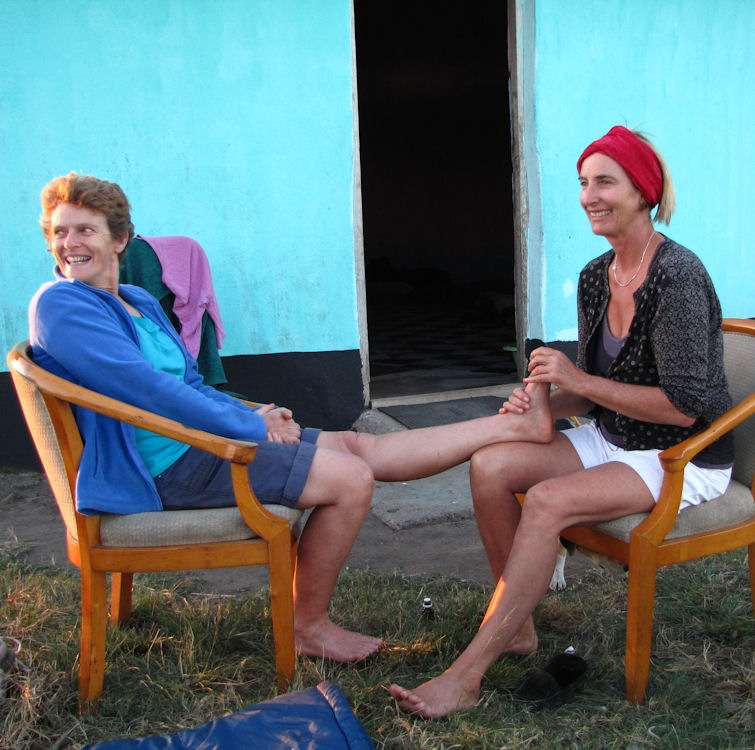 and even the crochet club was hosted on a blue blanket.

Come to think of it – we were quite a colourful bunch altogether. 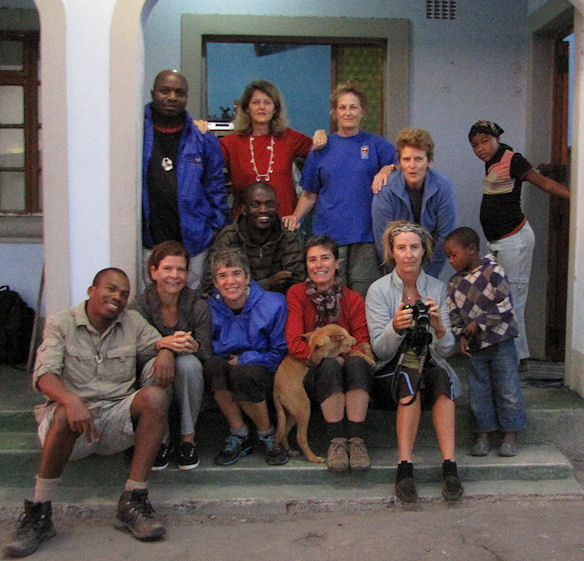 Shell middens and the high tide lines were a wash of creams and whites, sun bleached shades.

Then we crossed the Egosa faultline and everything turned green. With bright splashes of pink and purple and blue as the grasslands filled with flowers. 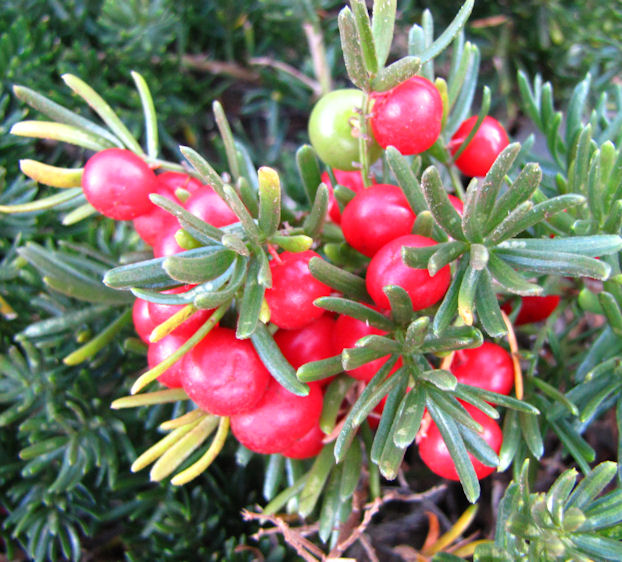 and the red edges on the succulent Cotyledon leaves.

The Ndlovu family getting ready for school was mostly red and green too (with just a few blue stripes). 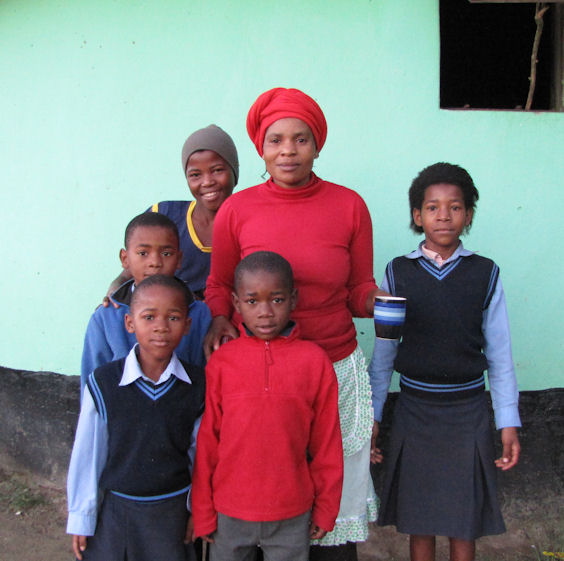 The homesteads had blue doors 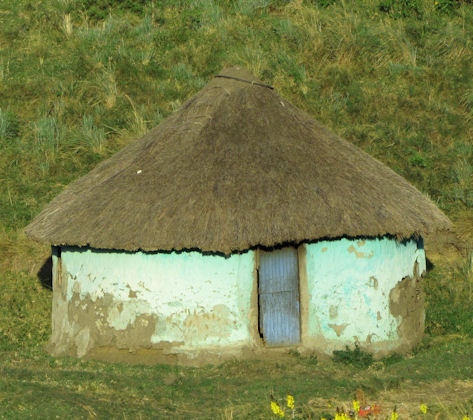 or a blue band to connect the entire homestead.

and turquoise (the most popular colour)

and yellow (ok, this was pretty unusual!)

occasionally they were plain white.

Then came black beaches – where we pondered the curse of mineral rich sands on Margie’s birthday.

Without doubt, we will lie down in front of bulldozers hoping to mine titanium from these sands. We also need to curb our taste for aeroplane trips, perfectly white paint and paper, mobile phones and other gadgets which use titanium to manufacture. This could be more challenging.

Pebbles in tasteful shades of grey and taupe and stone.

The goats would be annoyed if their playgrounds were destroyed, I am sure.

Contrasts were sometimes quite startling – illustrating the drama of the landscape to perfection: black and blue

Quite likely, our group were a little startling at times too. Hopefully we managed to blend in just a bit. We certainly wished hard to be part of this landscape.

Right to the end the sea and sky were still blue.  Maybe soon blue will be my best yummy colour too?

To plan your own colourful adventure: http://pondolandwalkingsafaris.co.za/